You can find on this page the Lyon trains map to print and to download in PDF. The Lyon trains map presents the rail network and railway stations of the trains of Lyon in Auvergne-Rhône-Alpes - France.
High-speed TGV trains link Lyon Part Dieu with Paris Gare de Lyon in around 1h57 to 2h08 roughly hourly through the day as its mentioned in Lyon train map. 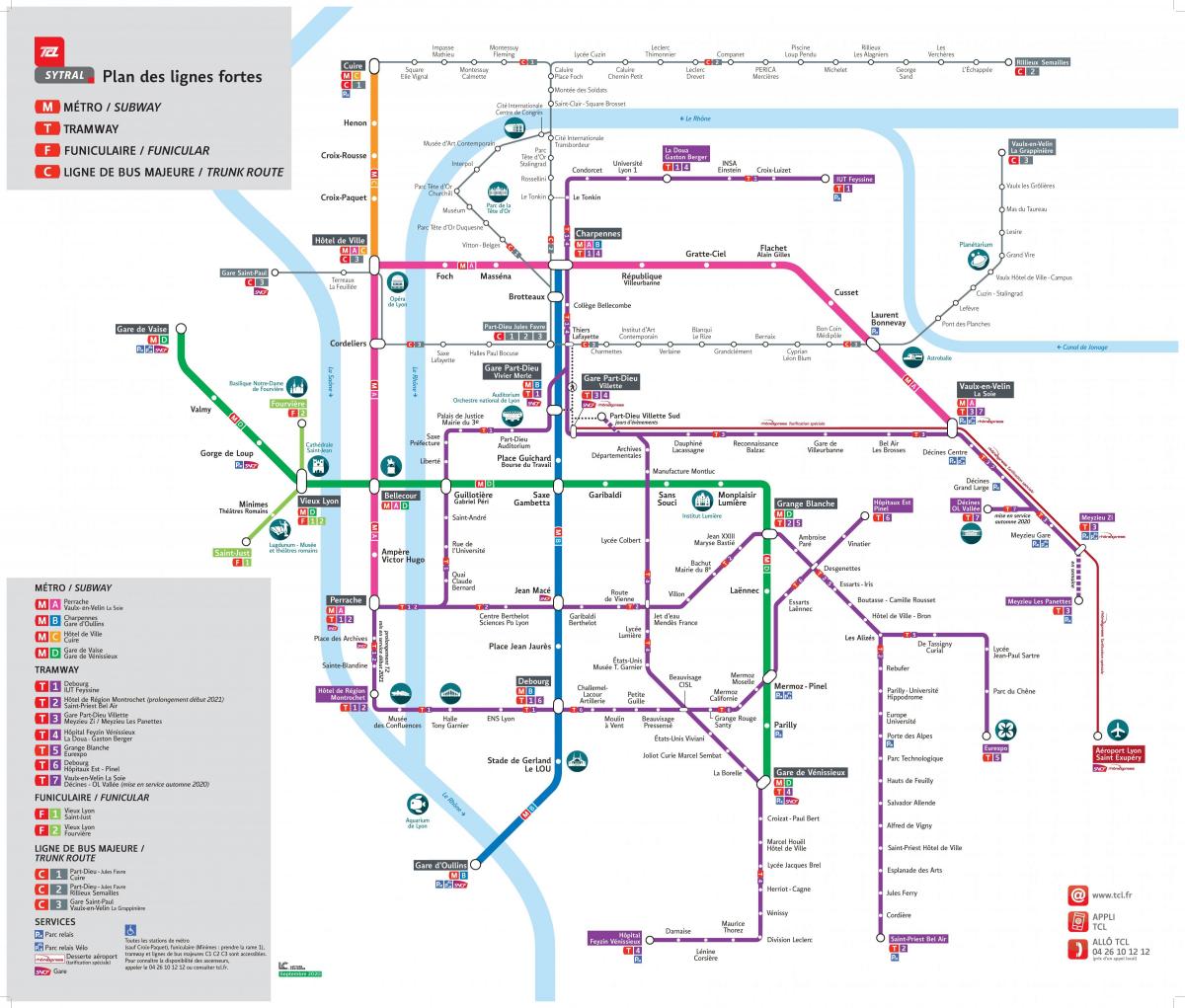 The Lyon rails map shows all the railway stations and lines of Lyon trains. This railway map of Lyon will allow you to easily plan your route with the trains of Lyon in Auvergne-Rhône-Alpes - France. The Lyon rails map is downloadable in PDF, printable and free.

Lyon is connected to the north (Lille, Paris, Brussels, and in the future Amsterdam) and the south (Marseille, Montpellier, and in the future Barcelona, Turin) by the TGV. It was the first city to be connected to Paris by the TGV in 1981 (see Lyon rail map). Lyon has two major railway stations: Lyon Part-Dieu, which was built to accommodate the TGV and has become the principal railway station for extra-regional trains; and Lyon Perrache, which is an older station that now primarily serves regional rail services. In practice, many trains, including TGVs, serve both stations. Smaller railway stations include Gorge de Loup, Vaise, Vénissieux, St-Paul and Jean-Macé.

Turin-Lyon is a railway line for freight and passengers located in the heart of the Mediterranean Corridor (of the TEN-T trans-European network) as you can see in Lyon rail map. It connects the Iberian Peninsula to Eastern Europe, passing through Italy with the Turin–Trieste route. Central to the new line is the cross-border section that, at 65 kilometres-long, goes from Susa to Saint-Jean-de-Maurienne, in France, and crosses the Alps thanks to the Mont Cenis tunnel.

The main railway stations are Lyon Part Dieu and Lyon Perrache, there is also one located at the airport which is 25 km east of Lyon city centre as its shown in Lyon rail map. There is a regular shuttle bus (Satobus) which connects the airport’s railway station to the two other stations in Lyon centre. High-speed trains go from Paris to Lyon in just two hours. Lyon Part Dieu is also the regional coach hub with Eurolines and other coach services running from here.