You can find on this page the Lyon streets map to print and to download in PDF. The Lyon roads map presents the road network, main roads, routes and motorways of Lyon in Auvergne-Rhône-Alpes - France.
Lyon Old Town is a Renaissance district at the foot of the Fourvière Hill. With its paved old streets (see Lyon streets map), colourful façades and secret passageways (les Traboules), the Vieux-Lyon was a key element in getting the city listed as a World Heritage Site by Unesco. 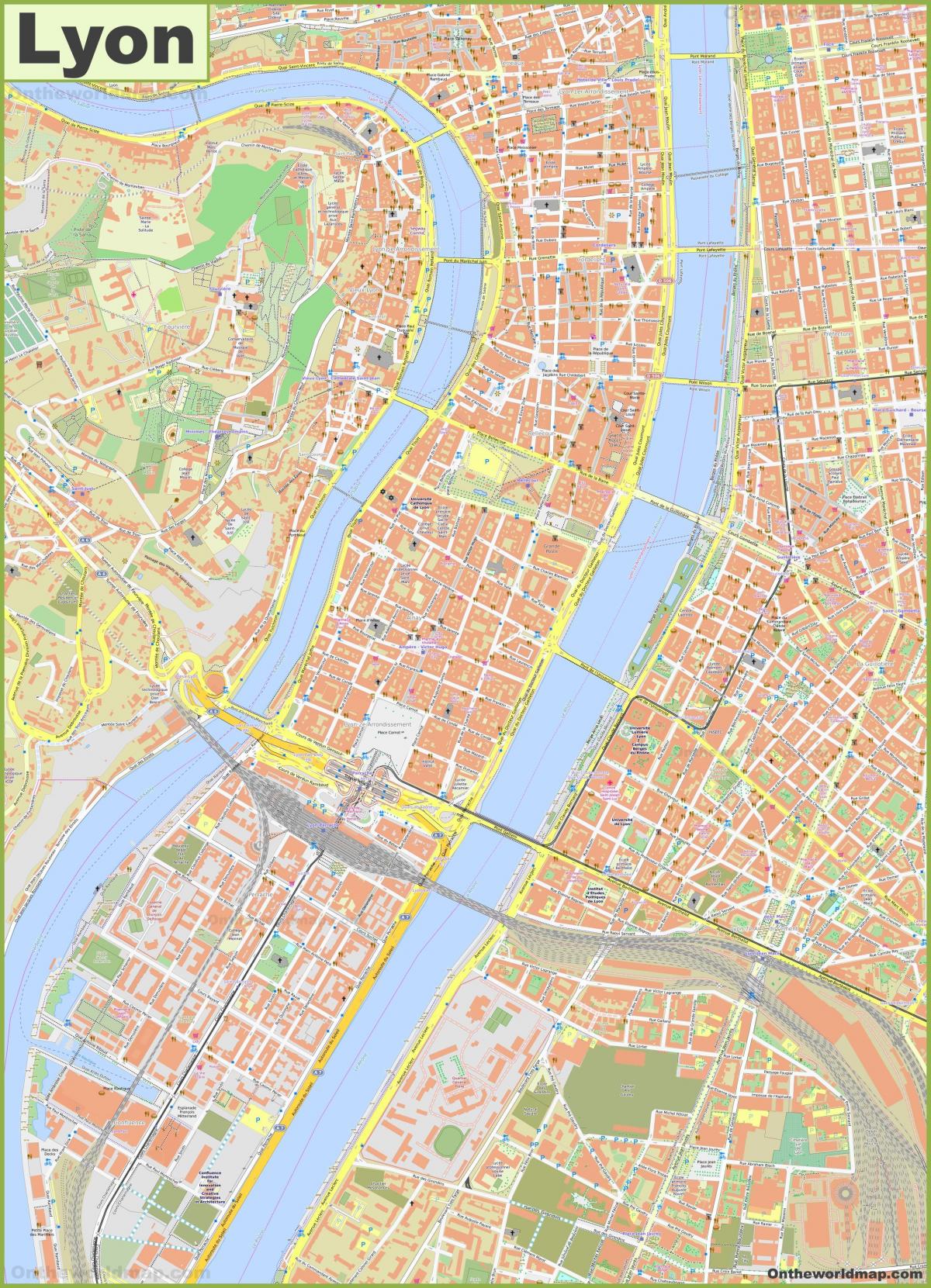 In Vieux Lyon (5th district), most streets run parallel to the river, making it tricky to get from one street to the next without having to make a huge detour, so courtyards with connected through a network of passages and a large number of shortcuts were created. It was not until the Middle Ages, and particularly the end of the 13th century, that street names were first used in France. They were often long, unwieldy descriptions, not the succinct appellations we know today. In Lyon back in 1342, for example, there was a road called ‘la rua qui fiert vers los Fraros Prejurs’ (the street which comes out near the preaching friars as its mentioned in Lyon streets map); in Montpellier in 1404, there was a passage near the red light district called ‘traversa que va a las filhas’ (shortcut to where the girls are).

When leaving the Musées Gadagne, you can easily reach Rue Saint-Jean by Rue de la Fronde (Revolt Street). Rue Saint-Jean is the main street of Lyon Old Town as you can see in Lyon streets map. In fact, it is one of the most popular and visited streets in Lyon. It stretches for 500 metres from north to south, from Place du Change to Place Saint-Jean. It leads to the eponymous Cathedral. Street of the Jews Head south from place Saint-Paul via Rue Juiverie. This is a little paved and car-free street, like most streets in Old Town. The street dates back to the Roman era. In the late Middle Ages, many Jews started to move there, hence giving the street its current name.

Fifty metres south of the Exchange Lodge, at the beginning of Rue du Boeuf (Beef street) as its shown in Lyon streets map, you will reach a rather large building with unique architecture. The “Hôtel de Gadagne” now houses the “Musées Gadagne” (Gadagne Museums). Going South from Place de la Trinité, you will go through Rue Saint-Georges (St George Street). It is a nice paved pedestrian street and constitutes Saint-Georges area main street. As it remains quite unknown to most of the tourists who visit Lyon, it is quite a peaceful street. 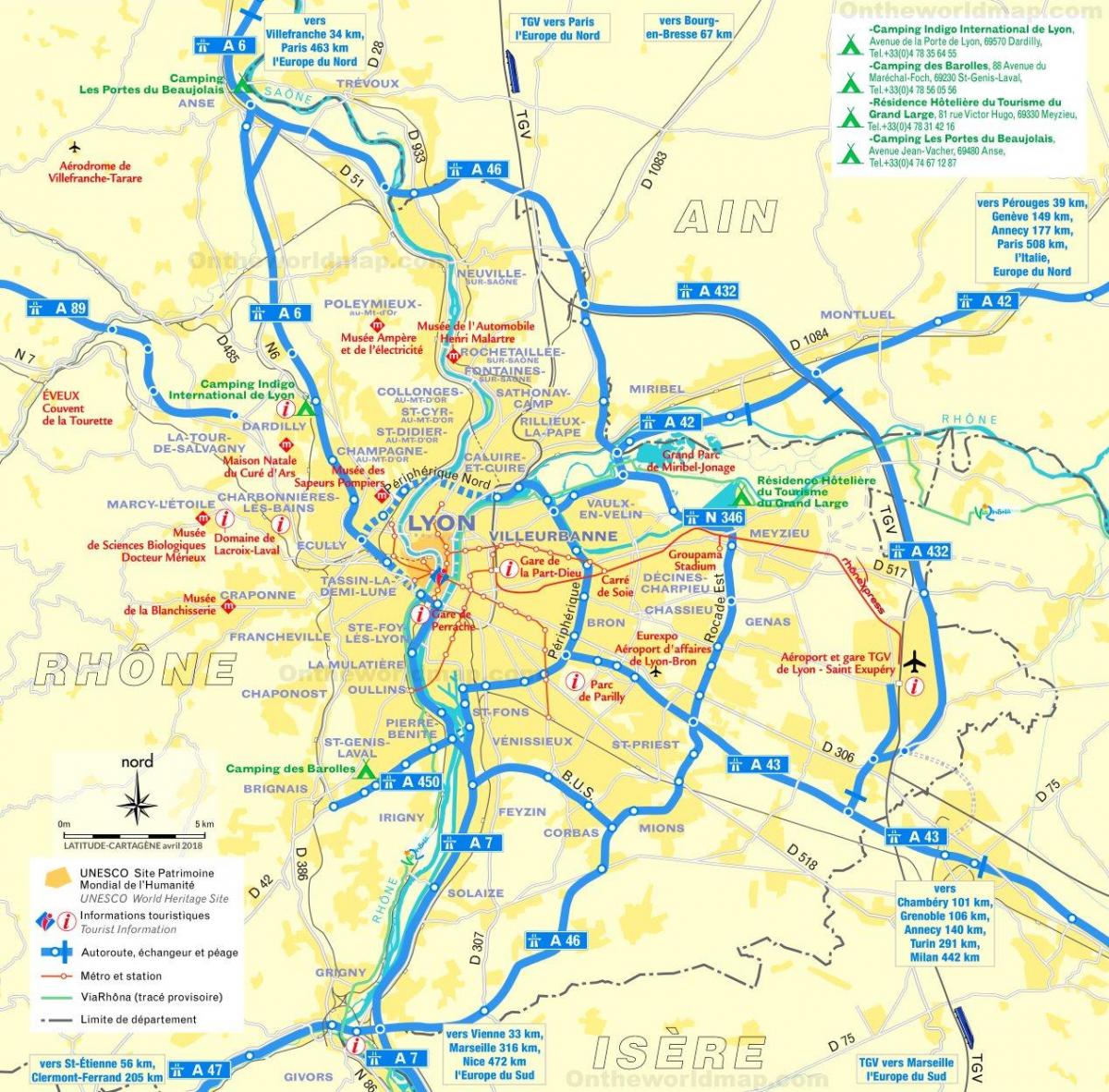 An extensive network of motorways links Lyon directly to Geneva, the Alps, Saint-Etienne, Clermont-Ferrand, Marseille, Grenoble, Nice and Paris as you can see in Lyon roads map. Lyon is the second largest city in France, and streets are often choked with traffic. Be prepared for traffic jams upon entering the city. Driving in the old district of La Croix Rousse is definately not recommended, due to the steep and narrow one-way streets, crossing each other in a totally random manner. Best to explore this area on foot.

Lyon is also marked as E15 - E15 being a European route running from Inverness to Algeciras. In the motorway sign above, the A43 autoroute is also indicated as being the E70; the main towns it leads towards are indicated in normal lettering; other destinations, such as airports, are indicated in italics. The word "Péage" at the bottom indicates that this is a toll motorway. Thus a sign saying "bis Lyon" is an alternative route avoiding the main roads, and generally with less lorry traffic as its shown in Lyon roads map. Bis, in French, means second (as in the prefix bi-). The "Bison futé" (in English the cunning bison) is the motorist who does not follow the crowd, but seeks out less crowded easier roads, the "routes bis", thus the "bis-on".

Alternate routes for driving from Paris to Lyon. Find free route and compare with toll route to find the right alternative for your road trip by car and free routes are drawn on same map in order to know how to avoid , turnpike roads and toll bridges as you can see in Lyon roads map. Toll Free Route is in blue color. Fastest route (Toll route) is in red color. If there is no Toll (toll) free route found, fastest route (Toll ) is shown. Click on "Show Route Differences" button to see how much more you have to drive in order to avoid Toll . It will help you in budgeting your road trips efficiently.