You can find on this page the Lyon neighborhood map to print and to download in PDF. The Lyon districts map presents quarters, region, suburbs and surrounding area of Lyon in Auvergne-Rhône-Alpes - France.
Lyon, one of France largest and most important cities, boasts diverse neighborhoods and districts that each have their highlights and charms (see Lyon neighborhood map).

The Lyon neighborhoods map shows region and suburbs of Lyon areas. This neighborhood map of Lyon will allow you to discover quarters and surrounding area of Lyon in Auvergne-Rhône-Alpes - France. The Lyon quarters map is downloadable in PDF, printable and free.

The 1st arrondissement occupies much of Lyon present-day city center, boasting numerous sites important to both local life and tourism. Situated on the northern part of the natural island known as the Presqu'ile (between the Rhone and Saone rivers), the area lies south of the Croix-Rousse neighborhood (4th arrondissement); Old Lyon and Fourviere lie to the southwest as you can see in Lyon neighborhoods map. Stretching from the lower part of the Presqu'ile between Lyon two rivers, southward to the Confluences area where the Rhone and Saone meet, the 2nd arrondissement covers a vibrant part of the city center, packed with shopping districts, a grandiose square, restaurants, theaters, and remarkably diverse architectural styles.

It may not be Lyon prettiest district, but the 3rd arrondissement has plenty to offer international travelers especially anyone interested in food, wine, and local market life. Located just east of the Presque'ile across the Rhone, the area is often considered Lyon second city center and is home to the busy Part-Dieu train station as its shown in Lyon neighborhoods map. Situated north of the city center in the 1st district, the Croix-Rousse (4th arrondissement) is one of Lyon most colorful and artsy neighborhoods, combining the city industrial history with current-day local life. The historic heart of both Gallo-Roman and medieval Lyon, the 5th arrondissement stretches along the left bank of the Saone River into the hilly heights at Fourvière Basilica. This is a neighborhood where most tourists will want to spend a good deal of time time, as it is packed with popular attractions, breathtaking architecture, and picturesque viewpoints over the city. 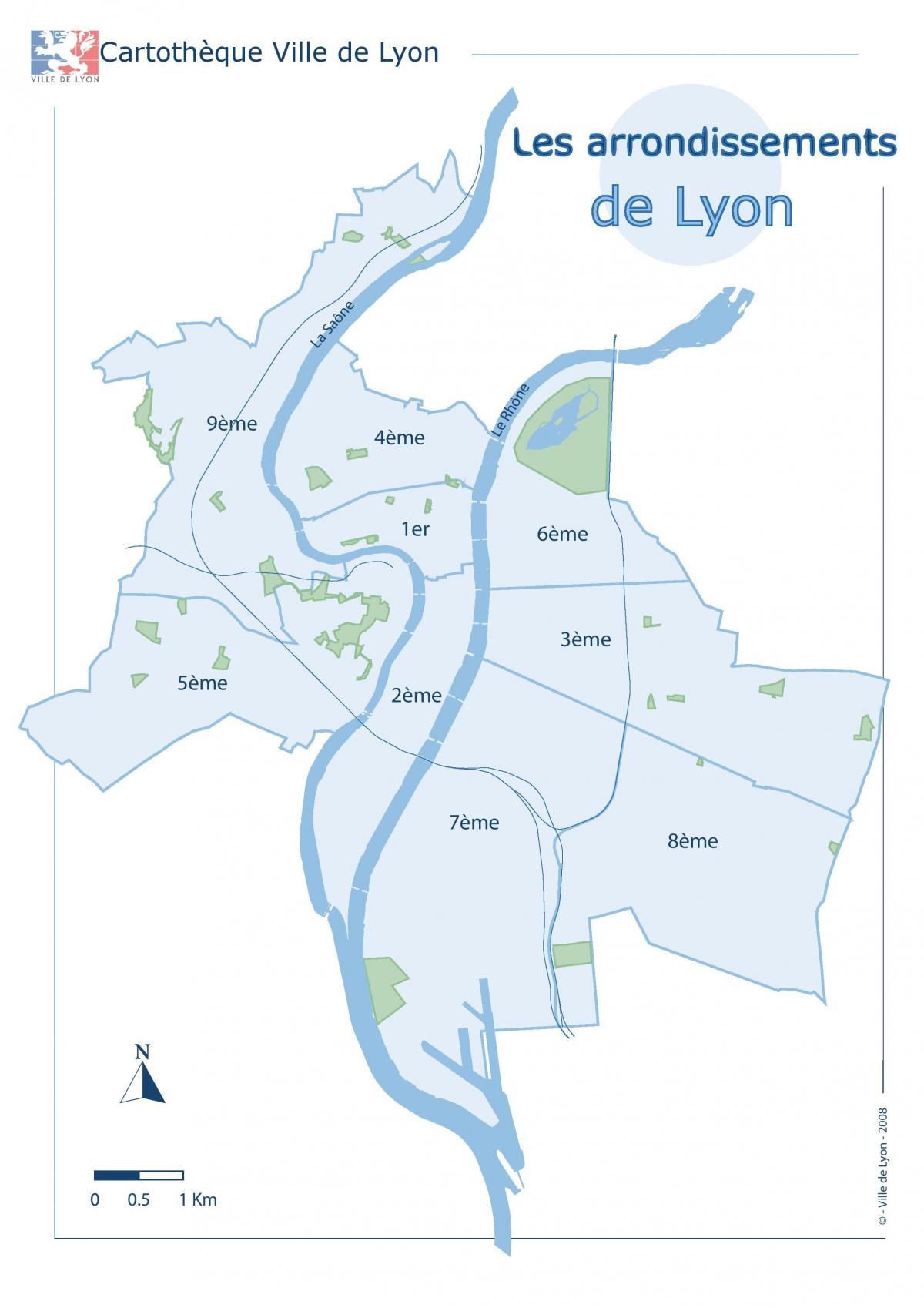 The nine arrondissements of Lyon (districts) are the administrative divisions of the city as its shown in Lyon districts map. Unlike the spiral pattern of the arrondissements of Paris, or the meandering pattern of those in Marseille, the layout in Lyon is more idiosyncratic. This is for historical reasons: following the annexation of the communes of La Guillotière, La Croix-Rousse and Vaise in 1852, the newly enlarged city was divided into 5 arrondissements, which originally spiralled out anticlockwise from the Hôtel de Ville (Town Hall); however, as the city population expanded, it became necessary to split certain arrondissements, giving rise to today seemingly random pattern.

The 1st arrondissement as you can see in Lyon districts map: Around the Place des Terreaux, many bars and pubs: this is one of the liveliest districts of the city. You can also find in this disctrict the Hotel de Ville de Lyon, the Opera House, Church St. Nizier. The 2nd district is located at the southern tip of the peninsula formed by the rivers Saône and Rhône. It is a the heart of Lyons, a shopping district with many stores and malls, the largest square in Europe, the Place Bellecour ( in the center of which the famous statue of Louis XIV). A portion of this district to the south has just seen the birth of the famous project “Confluence”, an urban renewal project in the downtown Lyon with all-new housing, offices and shopping centers. The 3rd district, a district with many offices and residential buildings, the train station La Part-Dieu, the largest shopping center in Europe (Centre Commercial de la Part-Dieu) and the new Oxygen Tour. The 4th district and the plateau of the Croix-Rousse well known for its alleyways, stairways, its market, its creators and its history related to silk.

The 5th district, the historic center of Lyon, with the Saint John Cathedral, St. Paul and St. George areas known under the name of the “Old Lyon”, Saint Just and his Fourviere Basilica which dominates and protects the city. The 6th district as its mentioned in Lyon districts map is often described as the most “chic” district of Lyon with wide avenues (Boulevard des Belges, Rue Duquesne, Avenue Foch) lined with beautiful buildings and mansions overlooking the Parc de la Tete d ‘ Or It is also a shopping area, mainly around the Cours Vitton. The 7th arrondissement, between the Rhone River (west), the Cours Gambetta north, the 8th district in the east, and the town of Saint-Fons in the south. It is the largest district of Lyon. It is located in an area nearly flat, alluvial plain of the Rhone. There are some universities, the International School, the Halle Tony Garnier, where there are many shows and concerts, the Parc de Gerland. The banks of the Rhone offers a very pleasant walk where bicyclists, rollerbladers, joggers and walkers can wander night and day. In the 8th district , “Cinema” was invented by the brothers Louis and Auguste Lumiere, The Light Institute traces the birth of cinema in Lyon. The 9th district is located on the Vaise district.