You can find on this page the Lyon buses map to print and to download in PDF. The Lyon bus system map and the Lyon trolley map present the network, stations and lines of the buses and trolley of Lyon in Auvergne-Rhône-Alpes - France.
There are more than 100 bus and trolleybus lines operating throughout the city, suburbs, and surrounding towns as its shown in Lyon bus system map. Night bus services are also available. 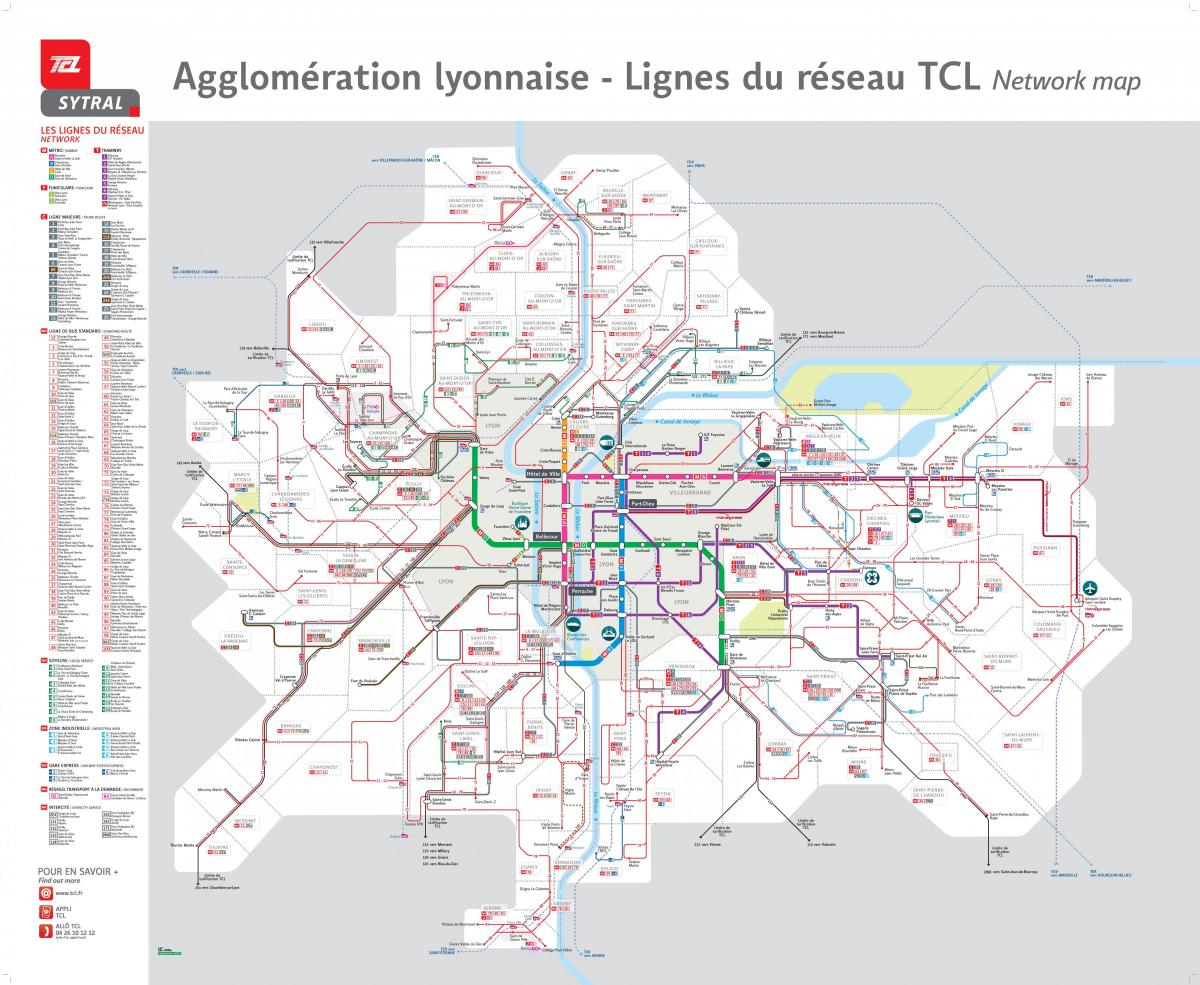 The Lyon bus map shows all the stations and lines of the Lyon bus system. This bus map of Lyon will allow you to easily plan your routes in the buses of Lyon in Auvergne-Rhône-Alpes - France. The Lyon bus system map is downloadable in PDF, printable and free.

The TCL surface network is used by Keolis Lyon on behalf of SYTRAL. It includes over 130 lines of buses and trolleybuses. They operate from 4:27 am (line 40) until 0:55 am (line 31) as you can see in Lyon bus map. Three nocturnal lines (Pleine Lune) operate from 1:00 am to 4:00 am from Thursday to Saturday during university periods.Only urban and departmental lines owned by TCL are listed here. Departmental line 175 Satobus Gares - Aéroport with special fares is not part of the TCL.Most vehicles belong to Irisbus brand (eg Renault Vehicles Industriels) .Since January 2007, all lines of the surface network (except C1 and C3 lines) have been used by "MPA" (Up Front Door). The return to this mode of operation took place gradually in the second half of 2006. On 1 January 2007, the former network Gibus of Givors was integrated into the TCL network.

Some departmental lines are accessible at the TCL rate within Grand Lyon. Beyond that, since January 1, 2008, the pricing has been € 2 per trip regardless of the destination for all Rhône General Council lines. Several bus lines run one bus per hour throughout the night, mostly to allow young people to get home. There are three such lines, labelled "Pleine Lune" ("full moon") as its shown in Lyon bus map. Pleine lune 1: Terreaux / Part Dieu La Doua / Cité Internationale. Pleine lune 2: Hôtel de Ville / Mermoz / Grange Blanche. Pleine Lune 3: Hôtel de Ville /Saint Irénée/ Ecully Grandes EcolesBus tickets can be purchased onboard with cash or card, but be aware that they cost slightly more than when bought in advance from machines or authorized points of sale. The city of Lyon also has more than a hundred school bus lines serving a total of 80 schools in the mornings and afternoons. Moreover, local authorities have set up a shuttle bus park serving 35 buses, as well as a special minibus service called Optibus which is intended for the disabled.