You can find on this page the Lyon bike map to print and to download in PDF. The Lyon bicycle map presents the bike routes and lanes of Lyon in Auvergne-Rhône-Alpes - France.
A bicycle network providing a low cost and convenient bicycle hire service where bicycles can be hired and dropped off at any of 340 stations throughout the city (see Lyon bike map). Borrowing a bicycle for less than 30 minutes is free. 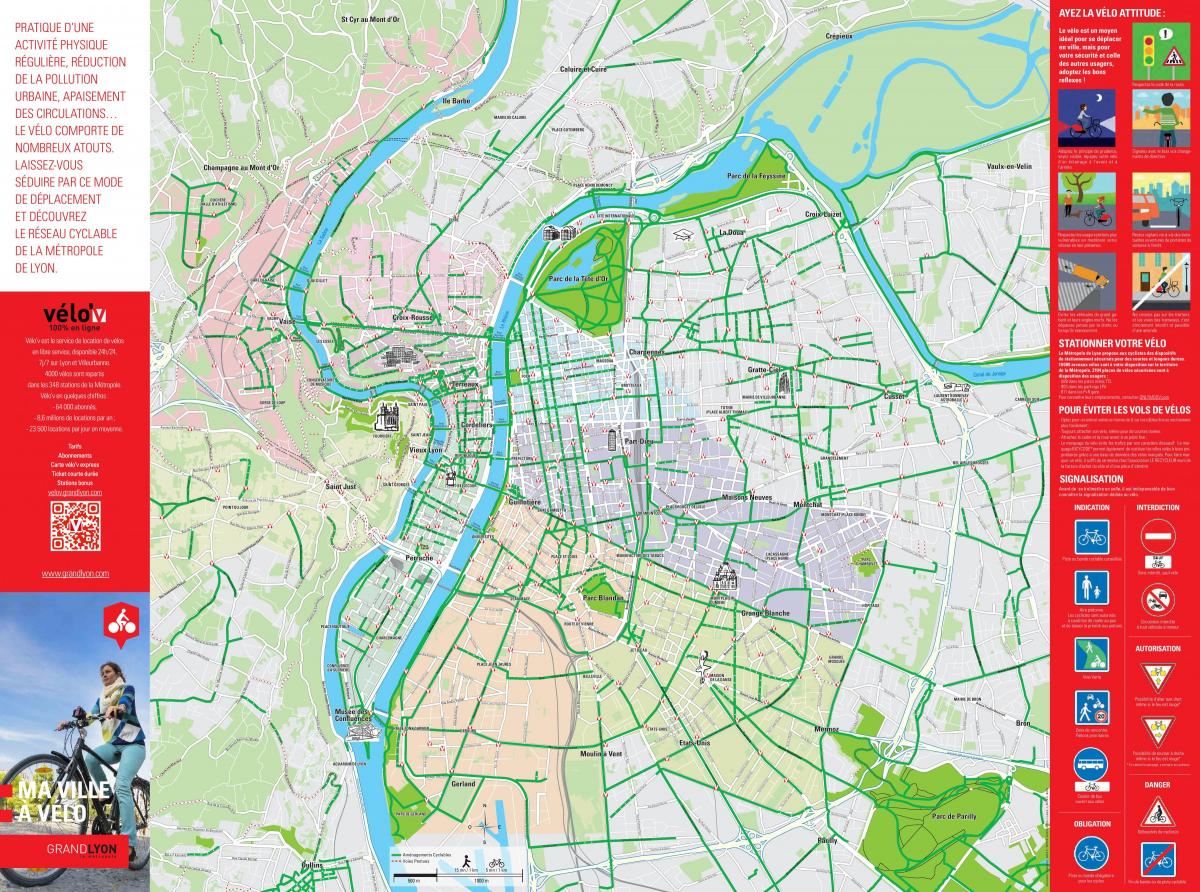 The Lyon bike lane map shows all the bike routes of Lyon. This bicycles lanes map of Lyon will allow you to easily plan your routes with a bike in Lyon in Auvergne-Rhône-Alpes - France. The Lyon bike lanes map is downloadable in PDF, printable and free.

With currently 98 cycle routes in Lyon there are plenty of options for outdoor enthusiasts. In total 55 bike rides, 19 mountain biking trails, 8 road cycling routes and 16 others are waiting to be explored as its mentioned in Lyon bike lane map. La Voie Bleue - Moselle-Saône à Vélo is a national cycle route stretching from Apach, on France border with Luxembourg, to Lyon. The route winds quietly along the Moselle before continuing along the Vosges canal and accompanying the Saône to the city of Gones. Enjoy the magnificent cycle route through central Lyon, along the Rhône banks. At the Rhône confluence with the Saône, you come to a brand-new quarter marked by contemporary architecture, the most striking building being the Musée des Confluences. The route is along greenways, but without specific signposting.

The Famous Rhône Valley as its shown in Lyon bike lane map, this popular route is great for experienced and new cyclists. Incredible views are in abundance as you head South towards Orange, visiting spectacular orchards, vineyards and lavender fields along the way. Your ride will continue 300km down the Rhone taking in beautiful, rural flatland nourished by the Rhone. Rent a bike for a day to cycle out of town towards a large green recreational area just outside the centre called Grand Parc Miribel Jonage. Following a route along the Rhône northbound, visit Les Puces du Canal (flea market) with some great finds.