You can find on this page the Lyon tourist map to print and to download in PDF. The Lyon tourist attractions map presents the monuments, museums, parks and points of interest of Lyon in Auvergne-Rhône-Alpes - France.
Surprisingly for a city that until 2014 had  no world-class museum, no great cathedral, and none of the top thirty tourist attractions in France, Lyon claims to be the second tourist destination in France after Paris, and ahead of Nice or Strasbourg (see Lyon tourist map). 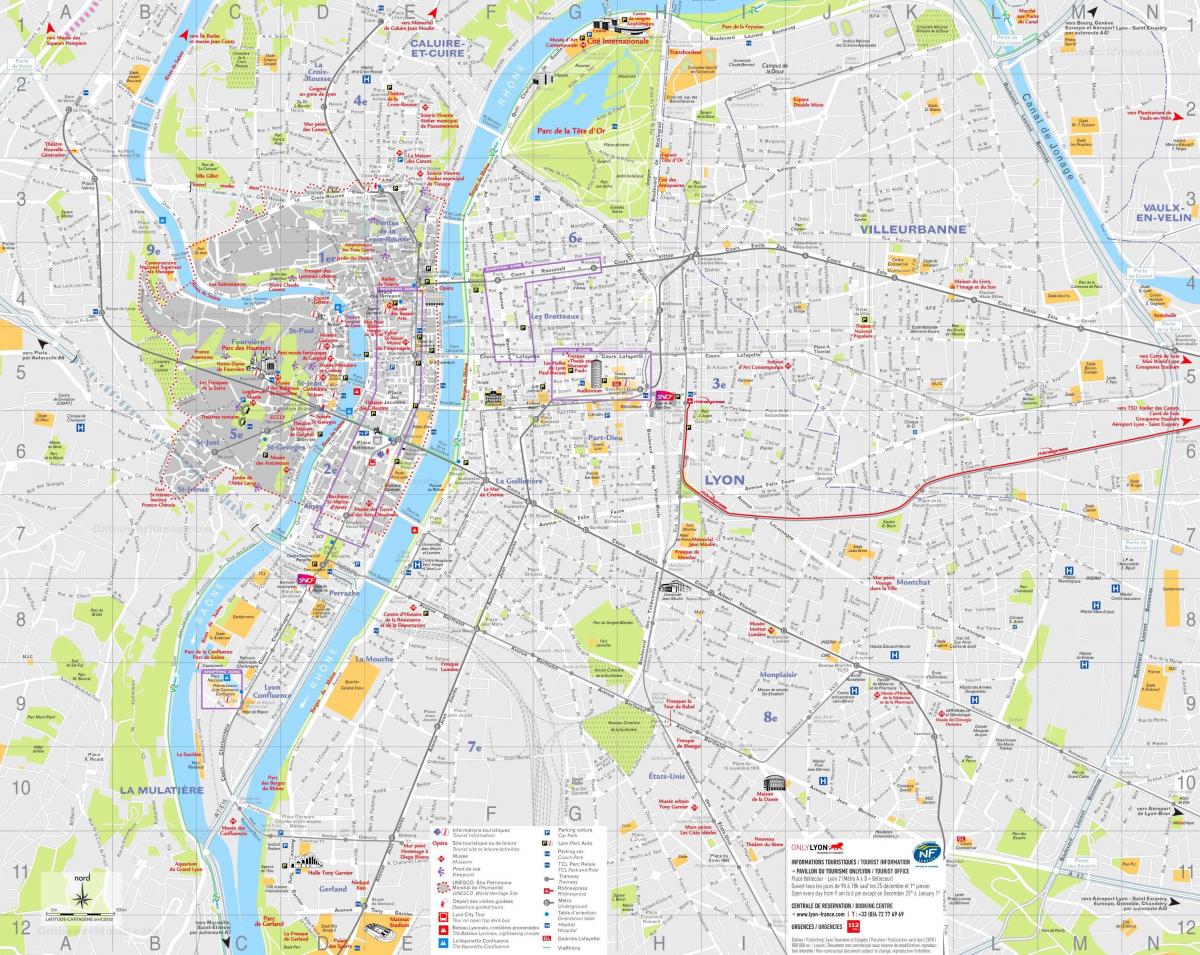 Map of Lyon points of interest

The Lyon sightseeing map shows all tourist places and points of interest of Lyon. This tourist attractions map of Lyon will allow you to easily plan your visits of landmarks of Lyon in Auvergne-Rhône-Alpes - France. The Lyon tourist map is downloadable in PDF, printable and free.

France second-most important city after Paris is surprisingly undiscovered. Although Lyon does not often make it onto tourist itineraries, many cultural treasures await those who take the time to explore the city. With a history dating back to ancient Roman times, Lyon has earned a place on the UNESCO World Heritage list. The city boasts France oldest ancient ruins, medieval quarters, and fine Renaissance houses as its shown in Lyon tourist map. The happiest of all visitors are the ones who journey here to sample the famous cuisine. The celebrated Michelin-starred Auberge du Pont de Collonges, 10 kilometers from Lyon, was helmed by legendary French chef Paul Bocuse for decades and is still a top destination for gourmands. Authentic Lyonnais gastronomy can also be enjoyed all over Lyon at bouchons, small cozy bistros that serve traditional local specialties.

Many of the top attractions in Lyon are illuminated at night, earning Lyon the nickname of Capital of Lights. Home to some of the finest chefs in the world, the city is also known as the capital of gastronomy, offering travelers yet another tasty reason to visit lovely Lyon. If you like the medieval Marais district in Paris, you will love Vieux Lyon. The pink-and-ochre Old Town is Europe largest Renaissance quarter as you can see in Lyon tourist map. The cobbled streets, Italianate courtyards and maze of hidden passageways are fascinating to explore. These alleyways and passageways are known as traboules. Their original purpose was to provide shelter from the weather for the silk-weavers as they moved their delicate pieces of work from one part of the manufacturing process to another.

Nationally, the 2nd conference and show city and 35th in Europe, every year Lyon hosts some sixty congresses and around a hundred shows. With around 208 000 visitors to SIRHA 2017, the professional hospitality and catering show and 7 400 attendees at ECTRIMS in 2012, an international congress on multiple sclerosis, the agglomeration is able to host the largest international events. Since an area of 500 ha in the heart of the Greater Lyon was classified as a World Heritage Site by Unesco in 1996, Lyon has been working on its image and perfecting its assets. This change is reflected today by growth in tourist numbers, in particular at weekends and in the summer season. With 22 % of visitors coming from abroad and an average stay of 3.7 days, Lyon has become a city-break destination for lovers of gastronomy and heritage as its mentioned in Lyon tourist map. 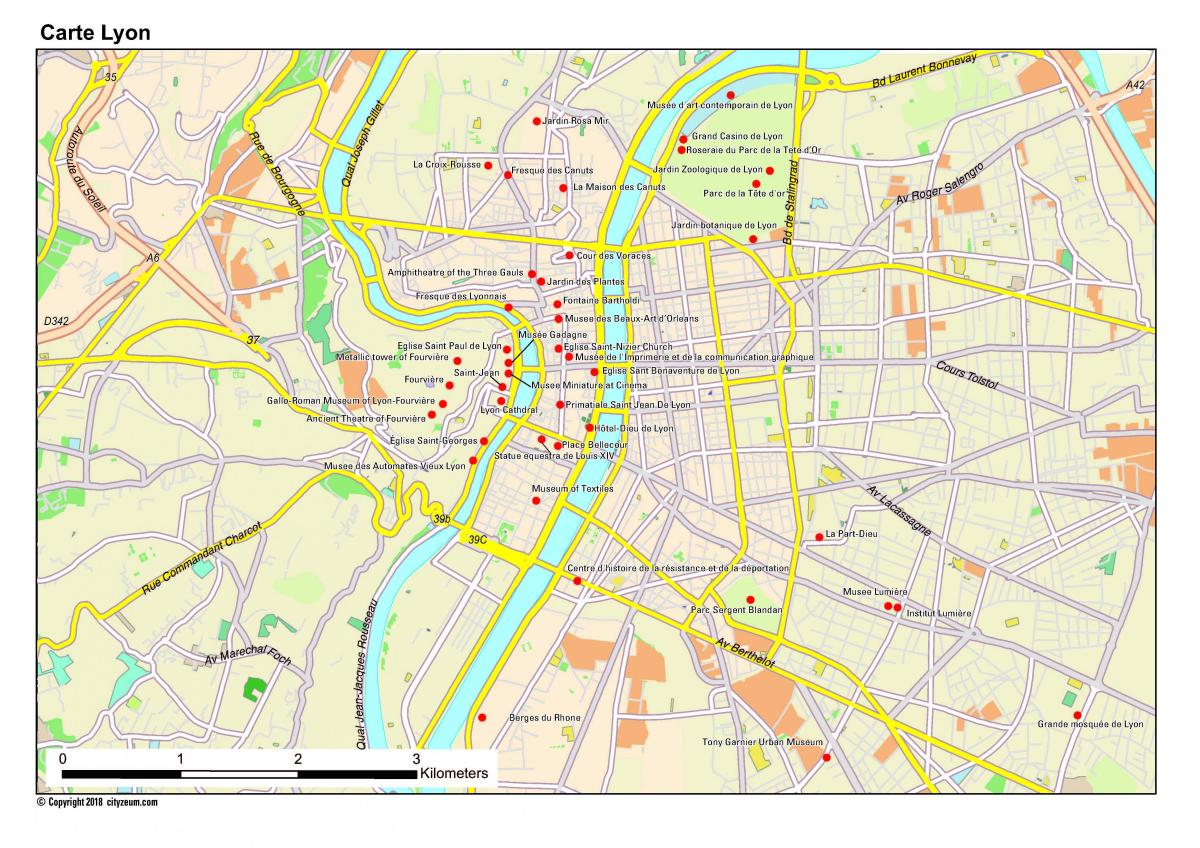 The impressive cultural heritage of Lyon is evidenced in this Musée des Beaux-Arts, considered the next best fine arts museum in France after the Louvre. At the Place des Terreaux near the Hôtel de Ville (Town Hall), the museum occupies the 17th-century Palais Saint-Pierre, a former Benedictine convent. Lyon atmospheric Quartier Saint-Jean as its shown in Lyon attractions map is the place to discover the old-world ambience of Vieux Lyon. This medieval quarter north of the cathedral is filled with narrow cobblestone lanes and quiet little courtyards. Lyon stands on the site of the ancient Roman city called Lugdunum, founded in 43 BC, which was the capital of Gaul. This superb Museum of Archaeology displays Gallo-Roman-era objects including vases, gravestones, mosaics, statues, coins, and ceramics. The antiquities displayed are from onsite digs (from the city of Lugdunum) as well as nearby Roman archaeological sites of Saint-Romain-en-Gal and Vienne.

While visiting Lyon, one should definitely indulge in the famous regional cuisine. The hearty local gastronomy features satisfying dishes such as steak, lamb stew, roast chicken with morels, and poached eggs in red wine sauce. The most unique culinary specialty is something known as "quenelles," a type of dumpling (made with ground fish) in a rich cream sauce. Built on the slopes of the Croix-Rousse hillside as you can see in Lyon attractions map, this historic neighborhood was an important center of weaving in the early 19th-century. Because of the high gradient of the streets, there are many charming curves and staircases. Another tourist attraction in this area is the Maison des Canuts (House of Silk Workers) at 10/12 Rue d'Ivry. This small museum is dedicated to the art of creating silk.

Lyon Presqu'ile District as its mentioned in Lyon attractions map is a piece of land, sort of like an island, within the river. This neighborhood is distinguished by its beautiful architecture and monumental town squares. The Place des Terreaux is worth visiting just to see the fountain by F.A. Bartholdi. Housed in an 18th-century Lyonnais mansion are two superb museums: the Fabric Museum and the Museum of Decorative Arts. The Musée des Tissus (Fabric Museum) is a unique museum that allows visitors to discover the fascinating history of Lyon silk trade, dating back to the Renaissance period. In a majestic location on the Colline de Fourvière (the hill that overlooks Vieux Lyon), the Basilique Notre-Dame rises to a height of 130 meters above the Saone River. The Basilica is accessible by funiculars running up the hill. 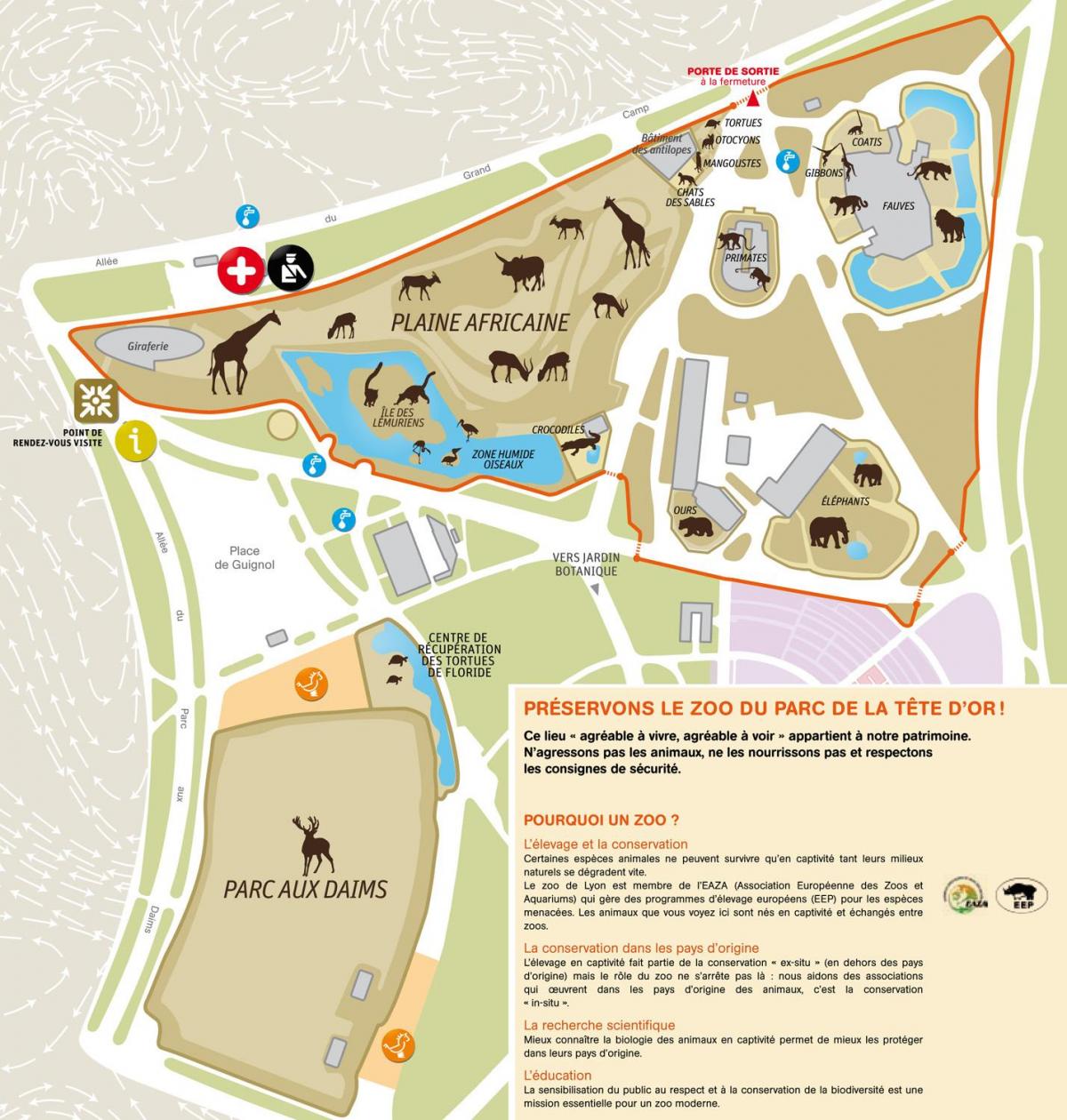 Parc de la Tête d'Or (literally, Golden Head Park), in central Lyon , is the largest urban park in France at 117 hectares as you can see in Lyon zoo map. Located in the 6th arrondissement , it features a large lake on which boating takes place during the summer months. Due to the relatively small number of other parks in Lyon, it receives a huge number of visitors over summer, and is a frequent destination for joggers and cyclists. At the northern end of the park, there is a small zoo, with giraffes, elephants, tigers and other animals. There is also sporting equipment, such as a velodrome, boules court, mini-golf, horse riding, and even a miniature train.

The park was finally open in 1857, although at the time all the work was not yet completed. It was located in the northern district of Les Brotteaux, along the Rhône. A dam was built to make non-flooded vast lands transformed into a park. In 1861 the park had spaces devoted to the presentation of animals. The plan by brothers Bühler included original entries like a park with sheep, a pen of chickens and a cow pasture. Slowly, a zoological park was created by the arrival of exotic animals, construction and renovation of adapted facilities, the latest being the African plain, inaugurated in October 2006 as its shown in Lyon zoo map.

Lyon zoo is a great place to visit if you are looking for opportunities to spend some hours. It is a compactly sized zoo with just enough animals to keep you engaged. Another plus point of this zoo size is that you do not have to walk around a lot like most other zoos. This attraction is counted as one of the best things to do in Lyon with kids. It is a relatively old zoo with its being that came into existence in the 18th century, by a French Lawyer, Claude-Marius Vaïsse as its mentioned in Lyon zoo map. Today the zoo accommodates 300 animals of 66 species.